skip to main | skip to sidebar

Thank you so much for taking time to read my blog and ask me some questions! You have some wonderful questions to ask, so let's get to it!
Ella asks: "Is there snow dogs? Do you wear skirts? Have you seen a penguin?"
Alexa "What color is a snow dog?"
Claton "Have you seen penguins?"
Tanner "Do you ever see penguins?"
Mason "How big are they?"
Ella, Claton, Mason, Alexa and Tanner, great questions! Once upon a time, there were snow dogs in Antarctica. They originally weren't born here. People brought them along when they took trips here, and used them to help pull dog sleds, and be friends and companions. But now, there are no dogs here. All of the countries who have people living in Antarctica agreed that no animals that didn't originally grow up in Antarctica could be brought here. They want to make sure that the only animals (except for people!) in Antarctica, really belong here. Too bad! I miss having dogs around! By the way, Alexa, the dogs you think of as snow dogs can be many colors, black, grey, orange, white, tan and many other colors.
I do not have any skirts here. Most of the time, it is too cold for skirts! Yesterday, it was 15 degrees F below zero, and that was the highest temperature! In a few months, it might get as high as 50 degrees F above zero, and then a skirt might come in handy! But I didn't bring any skirts along to Antarctica. Maybe I should have!
As far as seeing penguins, it's funny you ask! I just saw some penguins the other day! This doesn't happen all the time here, so I was very lucky to see them. These are Emperor penguins. They are the same kind of penguins you would see if you watched the movie March of the Penguins, or Happy Feet. They are 3-4 feet tall, and weigh 80-90 pounds. There are smaller penguins here, called Adelie penguins.
Here is a picture of the penguins I saw! 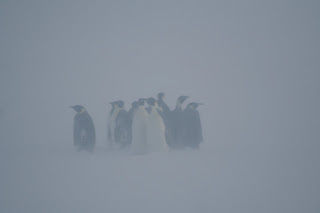 Grace "Do you feed the penguins?"
James "Do they shoot penguins?"
Hi Grace and James! A long time ago, when the first Antarctica explorers started discovering what was on the continent, they might have shot penguins for food. Now, that is against the law, and if someone shot a penguin, they would be in very big trouble. We are trying not to hurt the penguins, or any animals here, although sometimes the fish get hurt. All of the countries with scientists here have agreed not to hurt the penguins. Grace, the penguins feed themselves, by diving for fish. They are better at feeding themselves than we are!
Hunter "Do they have any other animals?" (than penguins)
Ben "Is there sharks and whales?"
Madison "Do bunnies live there?"
Hi Hunter, Ben and Madison! Yes, there are lots of other animals here. Here is a picture of me with some fish. There are a lot of fish here! Scientists are studying them because they might have anti-freeze in their blood! Why would a fish need anti-freeze in Antarctica? You should think about that. 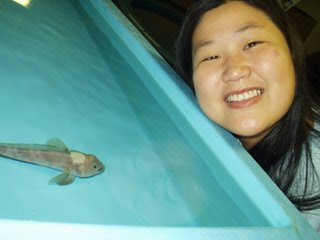 If I am lucky, I will get to see some seals, and yes, Ben, there are whales living around here too! In fact, a long time ago, a scientist trying to explore Antarctica almost got eaten by a killer whale! Scary! Some of the ice on the ocean will have to melt a little before I will be able to see whales, but some of my friends here have already seen seals! There are also birds here that are kind of like seagulls, called skua (skoo-ah) birds. If I take food outside, they will try to eat my lunch! There are no bunnies, however. Too bad! Bunnies would be cute!
Brendan "Do they have ice breakers?"
Brendan, great question! There are ice breakers. The science station I live at is on an island, but right now, we don't have water around the island, we have ice! It's so cold, the water freezes! We get a lot of supplies on airplanes, but once a year, we get even more supplies from a big ship! That's when we need other, smaller ships to break the ice for the big ship with all our supplies! Then I will see ice breakers. That happens every February. When the ice breakers make a path, sometimes cruise ships with tourists come here too! Did you know you can take a cruise to Antarctica! It is very expensive, but you could make it one of your goals to do that someday. Or you could make it a goal to come here and work! Think about it!
Kalista "Do flowers grow? Do apple trees grow?"
Hi Kalista! Great questions! It's much too cold for flowers and apple trees to grow here on their own. They would freeze and die! Luckily, we have a green house in Antarctica. We don't grow flowers or vegetables, but we do grow yummy things to eat, like tomatoes and lettuce and special herbs for our food. Sometimes, that is the only fresh food we get here! I will try to take pictures of the greenhouse here so you can see all the yummy things growing!
Bryce "How do you get food?"
Hi Bryce! We are lucky, and we have people who work hard to cook for us! I eat all my meals in the Galley, which is kind of like your school cafeteria. We eat breakfast, lunch and dinner there. We also have a little store that sells things like a convenience store. I can buy snacks and soda there, but my healthy food comes from the Galley. It's funny to eat every meal at the same place with the same people! There are no restaurants here.
Iain "Is Antarctica the coldest place?"
Antarctica is pretty cold. Outer space is colder than Antarctica. You'd be colder on the moon. But Antarctica is the coldest place on Earth. There have been temperatures in some parts of Antarctica recorded at almost 130 F degrees below zero, or even more extreme than that. Also, Antarctica is the driest place on Earth, and the highest continent on Earth. Antarctica is so dry, that it is considered a desert, even though it is cold, and not hot. Did you know deserts could be ice cold? Now you know something your parents might not even know.
Miranda "Do you have electricity?"
Libby "Do you have icicles in your room?"
Lexi "How cold is it there? Do you freeze at night?
Dylan "Is it cold there?"
All great questions! Luckily, Miranda, I do have electricity! Otherwise, I would have icicles in my room! But it is quite warm in my room. I don't freeze at night. It's cold when I go outside, but I wear a very warm winter jacket. Sometimes the wind blows so hard, however, that little bits of snow come in through cracks in the doors and windows, so that's kind if funny!
Alex "Is there houses?"
At McMurdo, there really aren't houses. We live in dormitories here. But there are houses at some of the other science bases run by other countries. Chile has tried to build a little town on the continent. There are houses and even a school! We do have a church at McMurdo. It has a stained glass window with a penguin on it!
Danika "Is it cold when it is night time?"
Yes! But it is cold day and night here! And guess what? Our night is disappearing. It doesn't get completely dark at all right now, and soon we will have the sun up 24 hours a day! That's just what it is like living very far south or very far north in the world.
Ashley "Is there plas?"
Hi Ashley! I don't know if you were asking me if there are plays here or not, but we do have people who love to perform! We have a talent show, people make bands and play music, people make art and display it -- you can definitely be an artist and live in Antarctica! We also have movies to watch.
Thanks, guys, for all the great questions! Keep them coming!
Keri
Posted by Keri at 1:27 AM 7 comments: 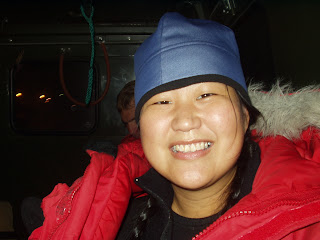 Hi kids! Thanks for stopping by! My name is Keri. Some of you are my cousins, some of you are in Mrs. Nelson's class, and some of you I might not know at all! But I hope I can tell you a little bit about me and what it's like to live in Antarctica!


Do you know where Antarctica is? Mrs. Nelson can show it to you on the globe, or maybe your parents can find it on a map. Antarctica is a continent, just like North America, only Antarctica is south of you. It's very cold here! There is lots of ice and snow. I have to wear a very heavy winter jacket every day!


I live at a science base called McMurdo Station. Here are some pictures: 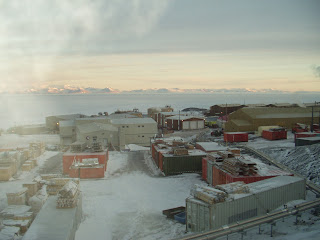 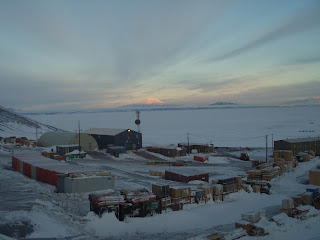 Please take time to notice the beautiful mountains in the distance! I get to see those mountains every day!


McMurdo Station is like a little town that has been built to support scientific studies about the earth. There are a lot of questions we have about global warming and the earth's atmosphere that can be answered here, along with lots of other questions. Right now, 300 people live here but in about a month, there will be 1000 people here, so it will be a just about the same size as Elbow Lake!


I'm working as a janitor here this year. I would love to hear your questions about Antarctica, so ask Mrs. Nelson to post some questions, or ask your mom and dad if they can help you post a question to me, and I will answer them!
Posted by Keri at 1:03 AM No comments: